Might we gladly present, in conjunction with the almighty Mism Records: fbcfabric & reindeer – It’s Not Who You Know, It’s Who You Know- THE FINAL CUT; the definitive edition of the critically acclaimed indie rap classic.

Carefully reassembled from the original album sessions, this release is spread across three twelve-inch vinyl records, split into six movements, and contains 89 minutes of music, over twenty-three songs, presented complete for the first time. 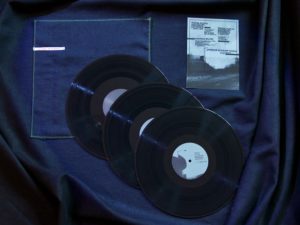 A luxury edition to be sure, and contained in high quality black card sleeves within a hand-sewn outer fabric case, replete with embroidered name tag and high quality A5 doube-sided credits insert, with all the pertinent facts in the case.

Limited to just 100 copies worldwide, the album is immediately destined to be a collector’s item, and is exclusively available direct from Mism Records themselves.  The release date is 9th October and the the pre-order is live.

…recently unearthed from the archives, and now for the first time in English, fbcfabric & reindeer in interview with DEAD Magazine, 22nd August 2008… 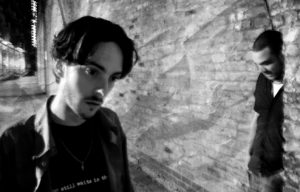 > Your “bio” on Buttercuts (records) doesn´t give too much info – still one can read that you both started making music together in 1999. Where are you from, what is your musical background and where did you meet?

fbcfabric : I started writing music in 1995. My musical background is quite simple really, I was crap at everything at school and pretty much fell out with a bare minimum of qualifications and no direction whatsoever. I tried college, and failed, so I started writing music at home. I’m not actually sure why I started writing, it just seems to have happened. And thats that. Can’t play any instruments, can’t read or write music. Nothing that I write has any proper musical structure – I just stop changing it when it feels right.

I met reindeer through a mutual friend who was writing with him at the time. It would have been the three of us working together now had that friend not decided to call it a day.

reindeer : Yeah, we met at a run-down college in South London in 1999 through a mutual friend whom I had been working with for a few years previous. I started producing and writing lyrics in 1992 but it wasn’t till 1997, when I got my first decent computer, that I recorded my first vocals over my own beat. Like fbcfabric I have no musical experience in my background other than a strong compulsion to buying the most experimental music I could find from an early age.

> Touring, you are playing with a band – how much are those people involved in your songwriting?

fbcfabric : They are involved in the respect that both Reindeer and I love them all dearly and their judgements are worth listening to, but at the start we were simply converting songs written by me to play live, so most of the creative decision was already made. These days rehearsals are very different because we are all working together on fresh material, so everyone has a say. My role in the band is simply to suggest what I think might sound good; we are all good enough friends for them to tell me to be quiet when I’m wrong.

reindeer : We wrote the album as a duo but when it came to playing shows we really wanted to expand the sound with a whole band. Instead of audtioning for members we simply turned to our close circle of friends, like our long-term collaborator Michael Rea amongst others. We consider them to be the most talented set of individuals, all doing great work in their own right. So when it comes to creating new material they are also the best team for developing new ideas, as well as simply finding ways to perform the album material.

> The sound of the album – in my opinion – benefits the most from the “deepness” of the mixing, giving the same importance to drums, field recordings, voice and instruments / samples. Since I haven´t heard anything else from you but this album: how did you find this mixture / was it something you archieved working on the album and knowing its main themes?

fbcfabric : Its an overly simplistic answer, but I really cant think of a better way to describe it; I just try to make things sound as similar as possible to how I feel it should be heard. I have a strong dislike of overly ‘clean’ music. It’s like that sound of a distorted guitar recorded so well and so crisply that all of its meaning has been removed and you are left with this empty container where a guitarist once put their feelings. In my opinion, an instrument and even what is played on it is only a very small part of the picture. The important stuff is what you might not even consciously hear. Its all about the environment around the instrument and its player; the atmosphere.

reindeer : It might be that because nor fbcfabric or I are actual musicians that we are able to stand back from any individual instrument and consider the whole. Music should reflect the world it is part of and for us this is having the actual world within the music. If someone is playing a guitar on the top floor of a building looking out over the city, then I would want to hear the room they are in too, the breeze and sound of the street blowing in through the window, their fingers on the fret-board, their breath, the sound of the person shouting next door. 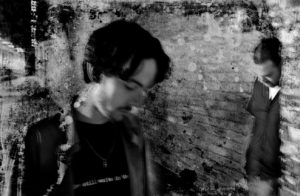 > Your album is split into 4 sections, feeling very much like a concept-album – did this concept write the album, or did it just fit the overall mood / content of the finished songs?

fbcfabric : I actually put together enough material for about two albums, and together we picked parts that would fit together to create what we wanted as a whole.

The overall mood of the album was decided long before we even started. I was always going to be a dark affair considering the hands it was in. Reindeer and I have never been known for our blinded-by-happiness outlook – its always been a matter of reality for us. The filthy truth is that we are all fucked, like it or not. We aren’t being all moody over here in a corner for effect. Neither of us walks around telling everyone how worthless their lives are. I like buying cool things like everyone else, but I suppose the difference is that I know that I am filling a void in my life with these material goods. I sedate myself with things I don’t really need, but these things make me feel good. I have no idea why they do but they do, and frankly, I want to feel better.

reindeer : As much time as we spent talking about the music we spent talking about how we feel about the world in which we live. The album was always going to be an extension of the two of us as inviduals and friends struggling in confusing times. The album was always going to be dark because we were in a dark place, but at the same time it is very much about communicating and reaching out, trying to explain how it feels. Being able to create a sense of not being alone in the storm.

> The last song of the album is called “and then John Peel died” – why was this incident so important to you to even use it as the silent exclamation mark of your first album?

fbcfabric : John Peel was essentially the only person within mainstream media who was outside of the cultural foodchain. A man who made decisions purely based on what he liked, and not what he was told to like by those in power (read: labels rich enough to hire expensive radio pluggers). Now, thats not to say that his taste in music was particularly great, but the fact that he had a genuine taste in music was unique. We have all said something stupid like “I don’t like House music”. John Peel would have listened and decided afterwards. Something we could all learn from.

reindeer : Mainstream music media always seemed so false. In listening to the radio it never felt like the DJ was actually playing the songs they wanted to. John Peel was different. Whenever I tuned into his show there really was a sense of a man just playing whatever he felt like, irrespective of genre or corporate backing. But I think in growing up in the UK and wanting to make music, wanting to be accepted as artists; the one voice you could count on to tell you whether you were doing good work or not was John Peel. So, in completing our album and never getting the chance for him to tell us how bad he thought it was, a regret to be sure.

> what are your future projects? 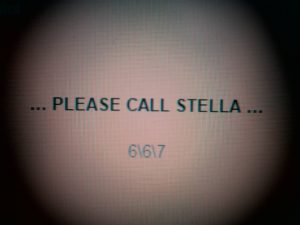 very gladly presenting مدينة الياسمين, the city of jasmine… a collection of live studio recordings gathered together amidst of the heat of the summer of 2014, during the rehearsal sessions for the ‘destruktiva v’ festival in mulheim-an-der-ruhr on 15th august.
–
assembling six songs taken from my most-recent ‘sittah sittah sab’ah’ release, from iron filings and sellotape, and the classic fbcfabric & reindeer album, along with one exclusive new interpretation; this short set seems to explode out of itself to create a truly mesmerising whole for its hypnotic duration.
– 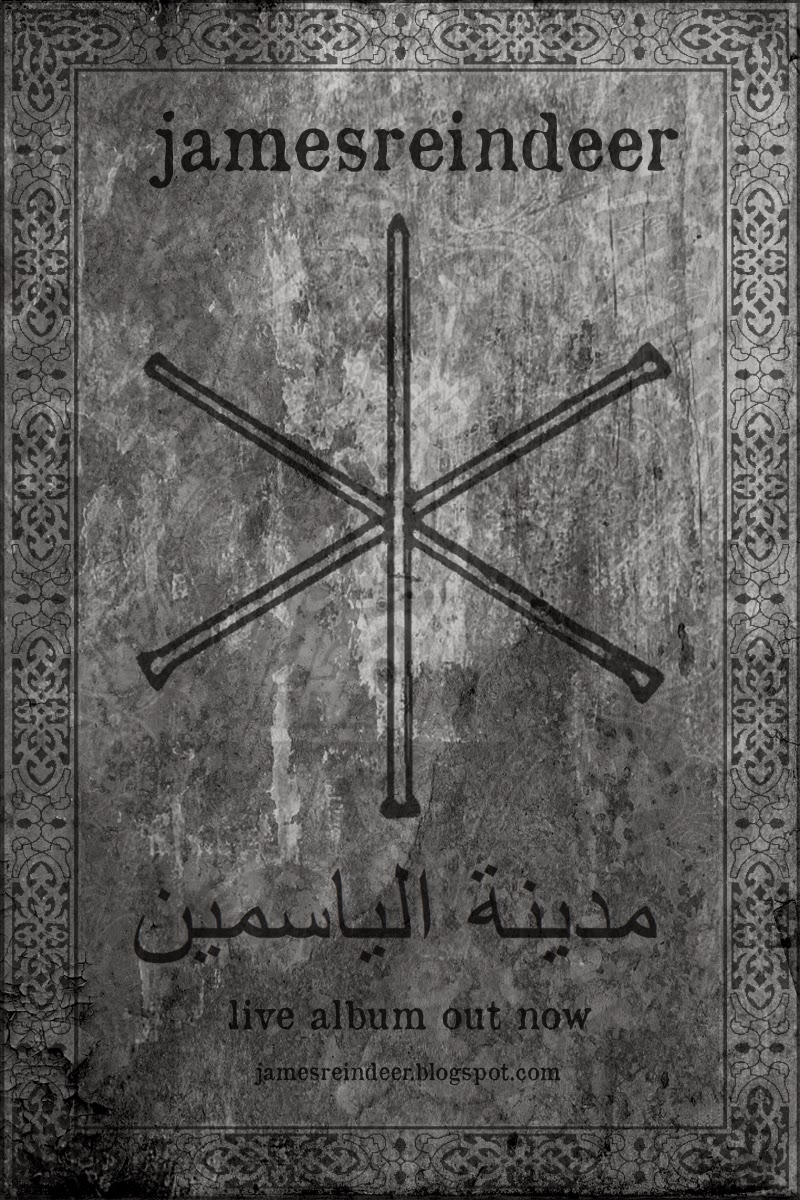 –
featuring all-live electronics work, utilising ableton controller technologies, analogue synthesis, outboard effects and a few other devices, these performances are able to combine in generating a staggeringly-engaging release.
–
now available as a name-your-price digital download, with all monetary contributions being gratefully received and put towards securing further necessary technical apparatus in order to further continue this exploration of live sound performance.
–
6|6|7