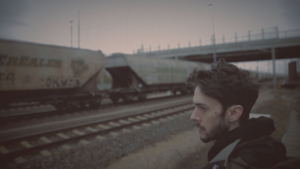 James Reindeer (b. 1978) is an English writer, producer, composer, and multidisciplinary artist best known for his acute, anguished rap vocals, post-rock sonic landscapes, and multifarious use of sampled field recordings.

Emerging over a decade ago as a voice of the disaffected indie-rap underground, Reindeer first found critical acclaim alongside longtime friend and musical collaborator fbcfabric for their highly-celebrated conceptual album, ‘It’s Not Who You Know, It’s Whom You Know’ (fbcfabric & reindeer).

Since then he has written and recorded twelve albums across a variety of genres from hip-hop to doom-drone to spoken-word, and collaborated with such greats as Son Lux, 2econd class citizen, Egotronic, Frittenbude, and a raft of others, as well as having performed live across North America and Europe, from the Kaos Network, LA, to Glastonury Festival, UK, sharing stages with the likes of Thesis Sahib, Rappin’ 4 Tay, Bleubird, Gong, and Ceschi, to name but a few.

Originally hailing from South London, UK, Reindeer has spent many years living and travelling throughout the Western Lands, from Ostrava to Oakland, Leipzig to Athens, and is currently residing in Brighton, UK.

He has currently working on a number of projects including a soon-to-be-unveiled producer collaboration with a notable rapper from the 667 Guild as well as scoring a new contemporary dance piece with long-time collaborator Britt Fishel, set to premiere in Florence, Italy this coming October 2021.

Seriously some of the best lyrics we’ve heard all year.

The expression of a more sure and frightening grasp of reality. This is demanding territory to tread.

Criminally overlooked. Dark, despondent and poignant in these troubled times. Make no mistake about it, this is one of the best UK hip-hop albums of all time.

Truly one of the greatest slept on underground hip hop albums of all time. A masterpiece is no understatement. A record we keep coming back to. Dark and cynical with a very sharp edge to it.