as always with touring, i had stayed up far too late the night before departing and, upon arising at dawn, was only operating with a little less than three hours sleep as i wandered out into the mist-shrouded cold of connewitz, ready to take the straßenbahn to the hauptbahnhof in time to make my first train connexion of the day. i rode the line west to frankfurt, drifting in and out of the half-sleep, reflecting on this long journey ahead, and slowly watched the skies turn from grey to blue until, upon arriving at the hauptbahnhof in frankfurt, it had grown to become a beautiful day. i changed trains and rode the next service to paris gare de l’est, slowly drawing myself out of the half-sleep, ready to ride the metro lines to the eleventh arrondissement and rue saint-maur.
–
as i emerged from the metropolitan, the first thing that struck me, along with how glad i was to be in this district again, was the wonderfully warm spring-like weather, and how it seemed like a different world to the cold grey of leipzig that morning. i paced keenly along the backstreets of the district, bustling with parisians attending to their early-evening activities, the scene unfolding myriad strands and emitting cacophonous waves as i found my weary way onto rue moret and back to l’internatinal itself, only to find both geste and isaac taking in the air outside the venue. how remarkable it was to be stood before them both again, and how it looked as if they hadn’t aged a day since we last congregated. within moments, pierre and francis appeared from across the road and the circle was complete, with hugs, smiles, warmest greetings and firm handshakes. it was on indeed.
– 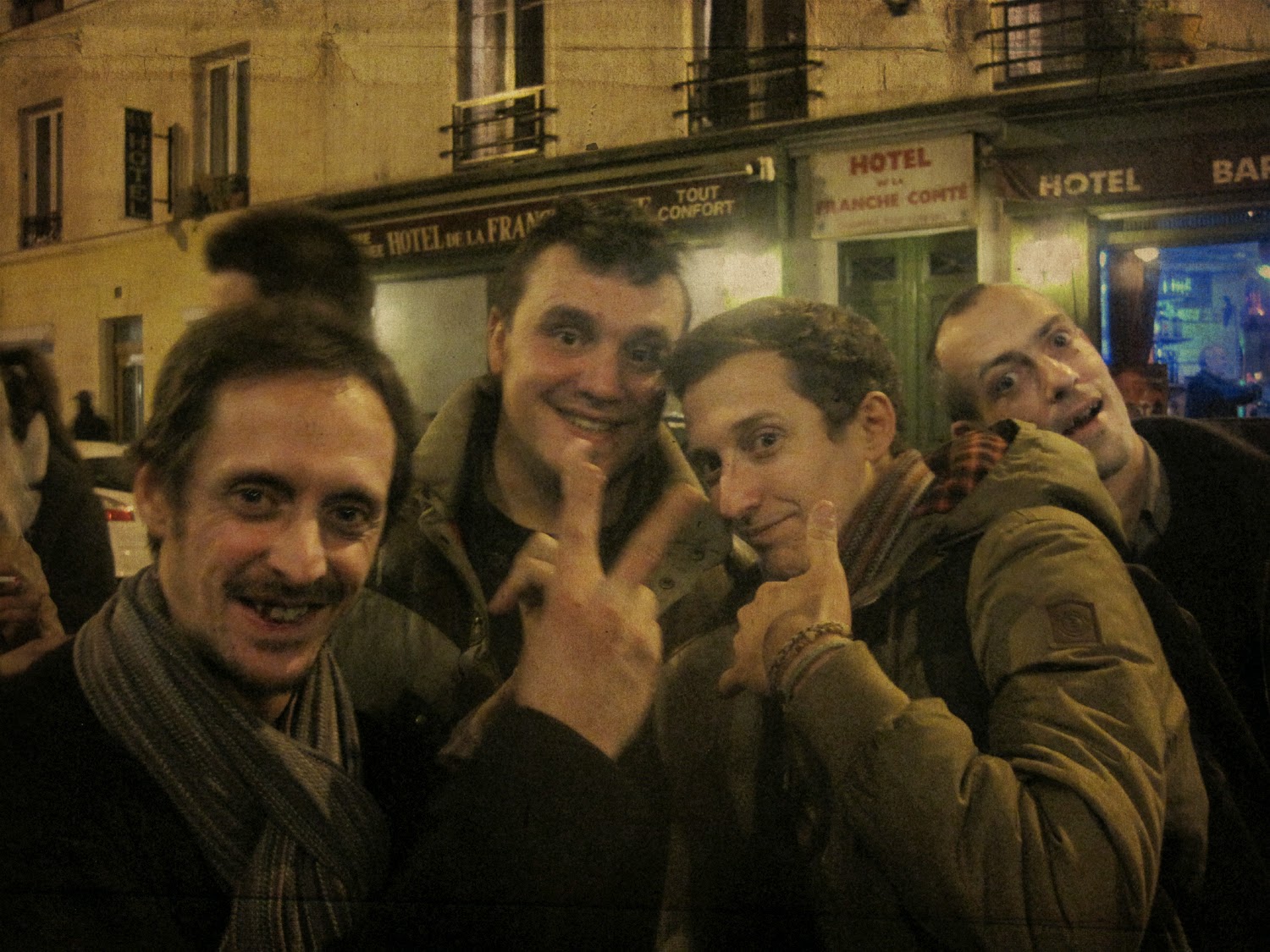 –
being the latest arrival after my long commute, my first order of business was to head downstairs to check the microphone for the performance, and how strangely wonderful it felt to step onto that stage again, the last time having been back in the fall of 2010, alongside babelfishh, james p honey, bill van cutten and mesparrow. how i could not help but reflect on that night as i checked the sound with ‘subduing demons‘ and ‘alhambra’; how so much time has passed since then, and how so very much has changed. how i had to think on how i could never have guessed that it would have taken so long for me to return to paris and how i was overwhelmed with gratitude to unexpectedly find myself in that place, communed with such close friends; about to embark on an adventure whose proportions and magnitude we could have had no comprehension of.
–
the night was already marching on though, and how the first souls were already beginning to arrive, and how it was the deepest pleasure for the first order of the evening to be introduced to the perfectly enchanting miss sophie girardeau, the better half of sir geste, who would immeditely grow to be a fond face along the route of the tour, along with the equally enchanting miss charlotte gonzalez, who would brighten our parisian evening and later capture an extraordinary photograph of my performance alongside francis for posterity. we retreated below once again to take our fill of some food, to prepare the merch table and to generally gather ourselves for the performance. and how the time afforded us more opportunities to catch up on our news, to marvel at this fantastic union and to talk in keen anticipation of the upcoming stops along the long path.
– 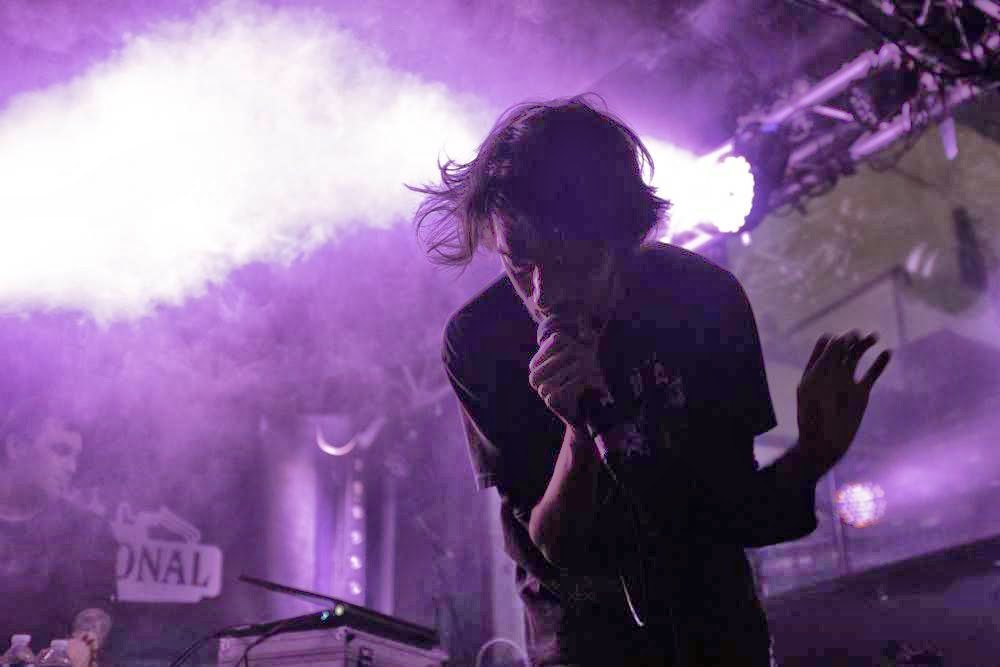 –
naturally, the night quickly grew to become a crazed-blur of hazy recollections amidst the din and madness of any given parisian evening at l’international. i keenly recall the arrival of many more dear friends, both those whom i have not seen in so long and those whom i had been yet to meet in person. how it was the deepest delight to see the brother roma and julien babel once again, and how it was such a real honour to finally get to meet the near-legendary magali vannier and céline du buisson; such dearly-wonderful souls, one and all, and how there were so many good people in attendance this night, some of whom i got to learn the names of, some of whom i did not, and how i constantly had to tell myself and those around me that i really had never expected that it would have taken so long to return; how i can hardly believe where the time went whilst i was away.
–
still, with all the fantastic turmoil and excitement there was also a show to be played and how we all found ourselves communed in front of the stage ready for the nights’ musical selections. as we are disco doom revenge, francis began the proceedings treating us to a perfectly-brief series of compositions which could easily have continued for a long while as far as i was concerned, until he proceeded to invite me to join him on stage and how we began our very first, completely unrehearsed, performance together. we began with ‘subduing demons‘ and, within the first moments of hearing his bass perfectly complimenting the track i knew that we would be on to a succession of really great shows. we kept our set short-but-sweet and retreated offstage to a rousing round of applause and how it was a truly magical experience indeed; the first of many, as time would unfold.
– 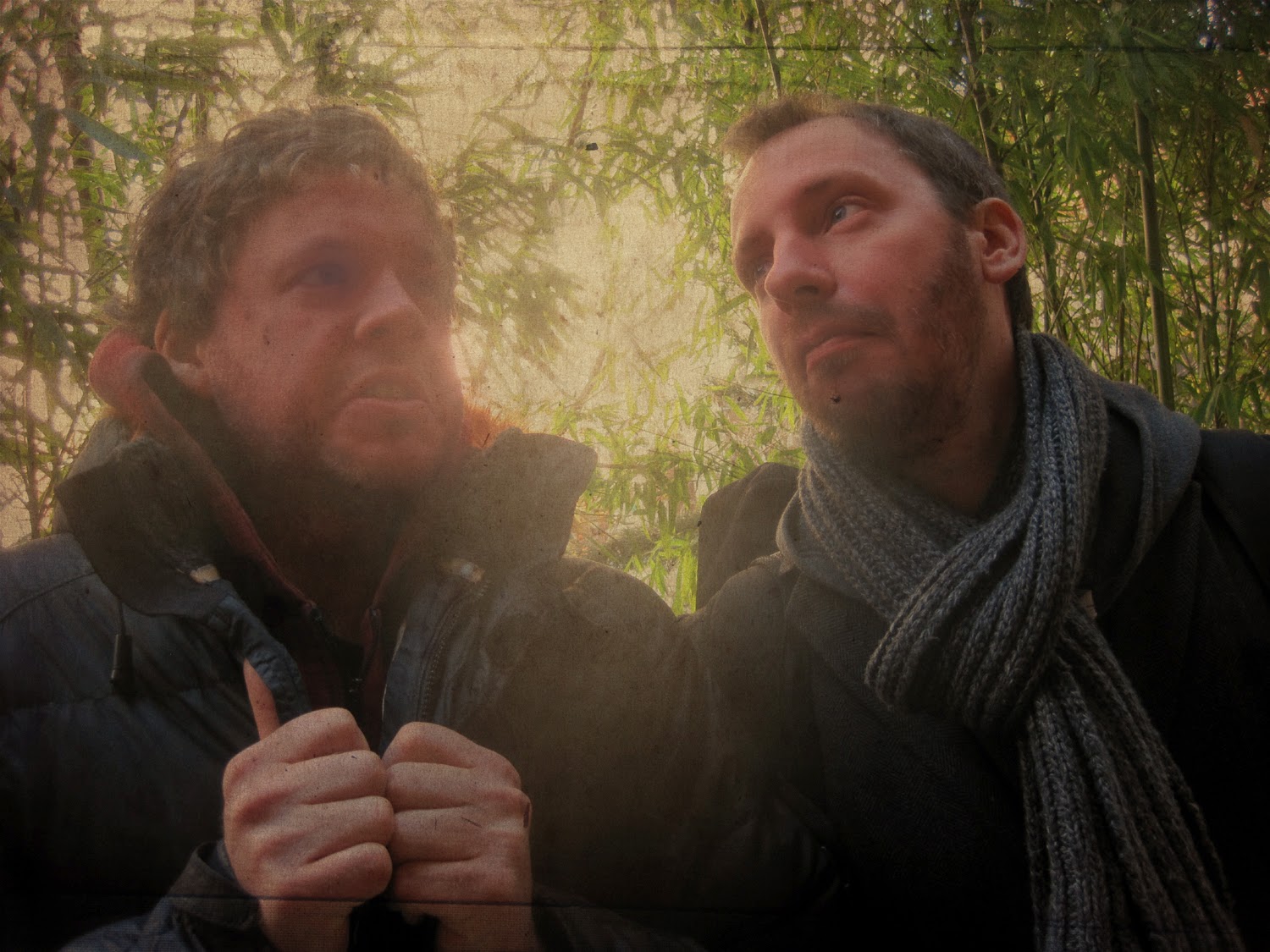 –
i was absolutely adamant to find myself in the front row as sworplay & pierre the motionless took to the stage and was only matched in my efforts to rap and sing along as much as possible by a super-nice, super-young guy who had also fought his way to the front row and who, after getting to chat awhile afterwards, proved to be a really decent chap indeed. almost needless to say isaac and pierre absolutely destroyed their set, running though almost every track from ‘tap water’ as well as dropping the majestic ‘no dancing‘ from zoën, as well as a sinister cover version of ‘twice the first time‘ from saul williams, just to raise levels to near-unworkable limits. i can hardly relate how much i enjoyed the show and was far too lost in the moment for it to even occur to me that i would get to witness eight more performances before the tour would be out. truly devilish details.
–
geste took not a moment to mess around and appeared onstage, hooded, scowling and ready to chew through the walls with his unrelentingly-chaotic sound. the hour had grown late enough for the dancing crowds to start to emerge and how i had to retreat away from the stage for fear of getting trampled by teenage girls enthused by the electronic rhythms; not to be the last time this would happen on this tour. but how it truly was a delight to get to hear his solo live-set again, i shudder to think when the last time actually was; sometime back in london at least. i let myself fall away into the waves of bass and let the highs flitter through my mind as i continued to try to let myself believe that this night was actually happening; that this tour was actually happening.
– 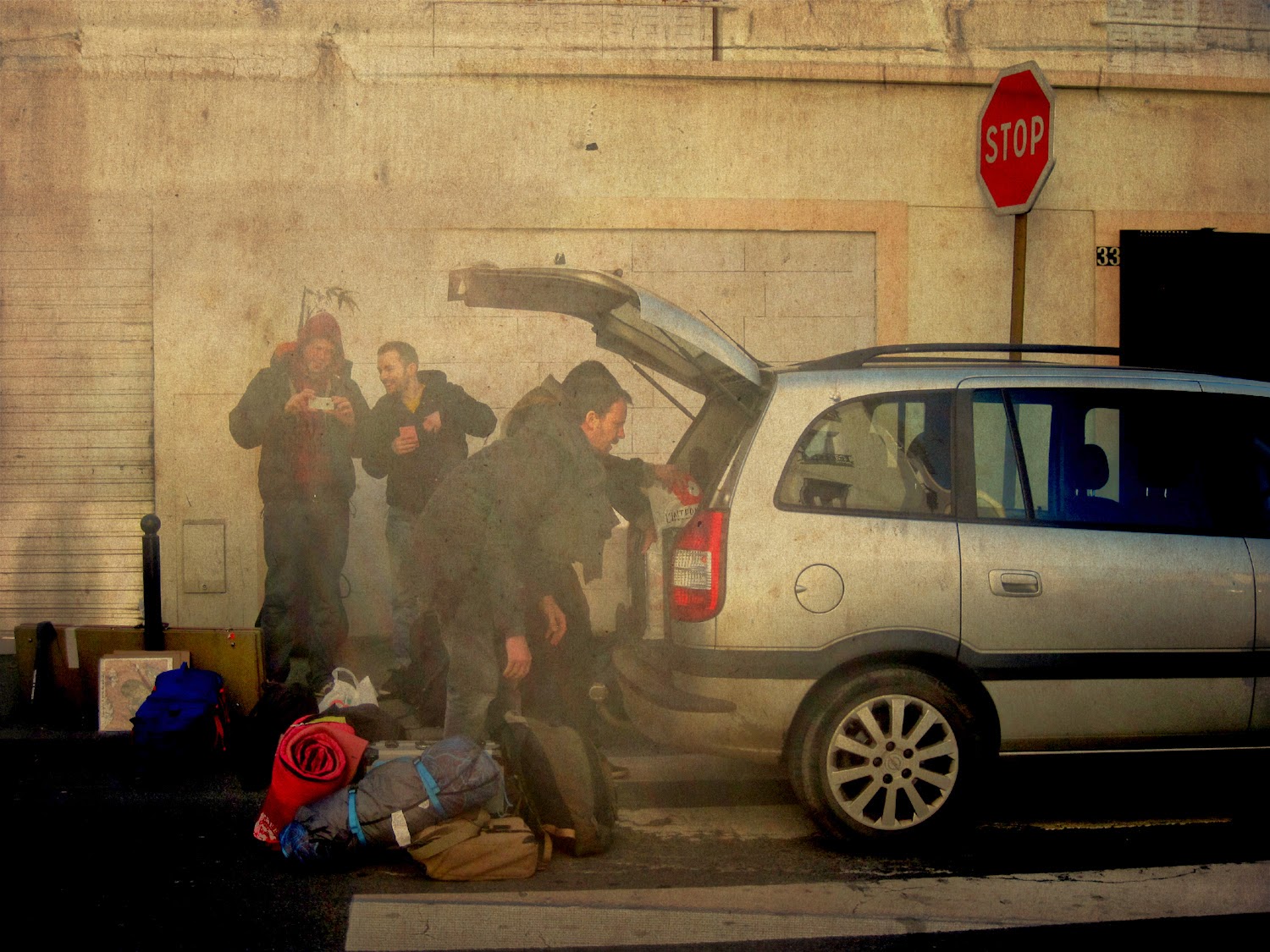 –
as always the night grew so late so fast. we were already being reduced to bidding farewell to the dear souls that had communed with us on this magical night, and were soon all cramming ourselves, the charming sophie at our side, into the tour car for the first time, driving south through the city, to gentilly, val-de-marne; to the geste safehouse and our sleeping place for the evening. we unloaded the car which gave us a chance to check out the compound; garden courtyard, rehearsal room basement, first floor balcony and charming residence. we took some measures to fix ourselves a little light sustenance, some hot beverages and the beginnings of our sleeping arrangements for the evening. it was in this hallowed moment that pierre first uttered the words ‘autoblow’, first in regard to his portable mattress and pillow, but before long, across the days, in escalating reference to myriad things that ought not be repeated in polite company. how i had almost forgotten what it is to tour with this man; the hilarity unfolding!
–
slowly we drifted off to sleep at some ungodly hour, and how the morning alarms were sounding out all to quickly. i can hardly remember what time it was we awoke exactly, but how we had scarcely secured three hours or so slumber, before we were hastily making our collective way through teas, infusions, coffees, pain au chocolat and croissants, loading the car and thinking about making our way to lyon. we were reduced to bidding farewell to sophie for now, but were filled with gladness that she would be taking the train to lyon to join us for the evenings performance and, moreover, that we would have the distinct honour of getting to stay at her families apartment within the city this night, a true honour indeed. with our farewells in order we piled into the car and promptly sat motionless for ten or fifteen minutes whilst pierre wrestled to get his smartphone to charge through the cigarette adaptor; an object of paramount importance as it was due to be providing our satellite navigation for the duration. gladly the device began to behave itself and we were on the road to lyon as the morning sunlight steadily began to build across the landscapes unfolding.
–
next field report : barbed wire garden – lyon
–
6|6|7