the first order of business as we drove south-east out of paris, en route to lyon, was to set about raiding the vast bag of albums that geste had cunningly packed for our listening pleasure across the long miles of the tour. it would be sage at this moment to immediately mention the almighty double-album from danyèl waro, which proved to be one of the first albums we auditioned and subsequently the one we returned to the most; beautiful maloya sounds along the highways of the old world. still, how the geste collection on this particular drive led to a long discussion between the man himself and swordplay surrounding the facts in the case of the richmond and dc hardcore scene and all the myriad bands therein that they realised they both shared an interest in. while they talked long and in depth, pierre and francis talked business up front and i let my eyes rest a while, desperately trying to catch up some of the missing sleep from the past two nights’; which would rapidly become an ongoing theme indeed.
–
as our route took us closer and closer to lyon, the weather seemed to improve with every mile, and how, by the time we arrived at le périscope to be greeted by the lovely folk there, we found ourselves in the midst of a truly beautiful spring afternoon. azure blue skies extended above the location and a hot sun bathed everything in the most warming glow as we unloaded our gear, sought to secure ourselves tea and coffee and set about the sound-check situation directly. how le périscope is a truly beautiful location indeed, how the sound was an absolute dream; both onstage and off, and how we could all only be so keenly aware of what a wonderful opportunity it was to play in such a venue. through the exhaustion and the haze of the night before, the makings were steadily building for another magical evening.
– 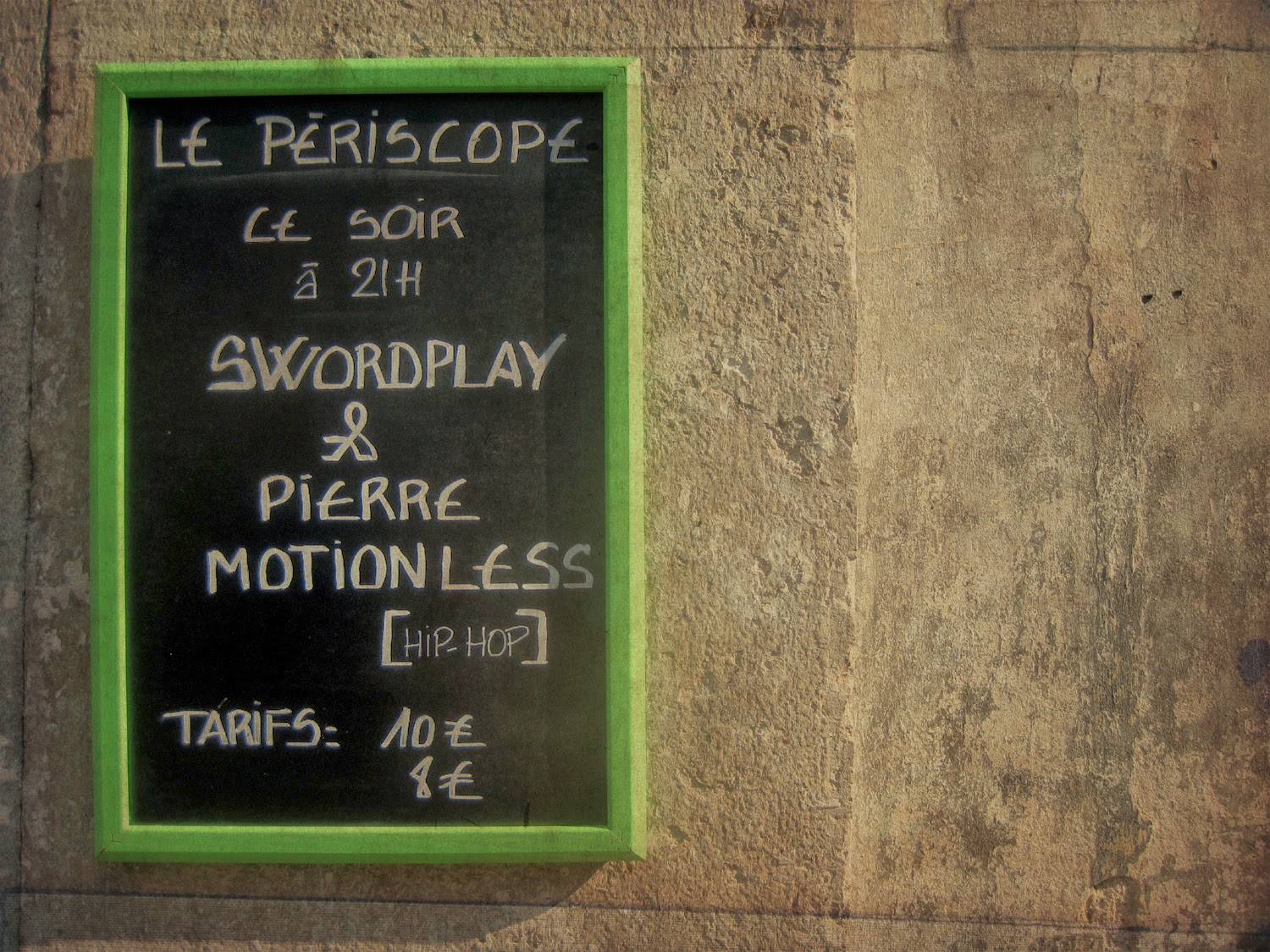 –
still, time was precious and our agenda was packed. with the sound-check all in hand, we steadily made our way en mass via the lyon metro system through the city and to the location of the hallowed jarring effects record store and label headquarters. glad handshakes were exchanged with the omnipotent mo and his expert consorts and how we were treating to a guided tour of their legendary installation before gathering together to take mint tea and talk awhile on the facts in the case of jarring effects, dora dorovitch, the barbed wire garden tour and all else therein. it was in these exact moments that i once again cursed my inability to understand and indeed be able to converse in french. i poured all my concentration into try to gleam any understand i could from the conversations, but was left to resign myself to re-doubling my efforts before the ‘next time’.
–
subsequent to our gathering, we filed our way back into the store, where a goodly number of folk had amassed in order to catch a small ‘in store’ performance, which we began to set about directly. isaac stepped up to the mic first and treating the audience to three or four songs in anticipation of the nights’ performance and how i followed-suit soon after. with the little showcase very much in hand we filed out onto the street and took in the lyon evening air before starting to think about making our way back to le periscope. it was at this point that the enchanting miss sophie reappeared after her train commute from paris and how our collective evening was once again brightened by her presence and, with our number being unified once more, we steadily made our way back to le périscope with a view to beginnings the evenings proceedings before too long.
– 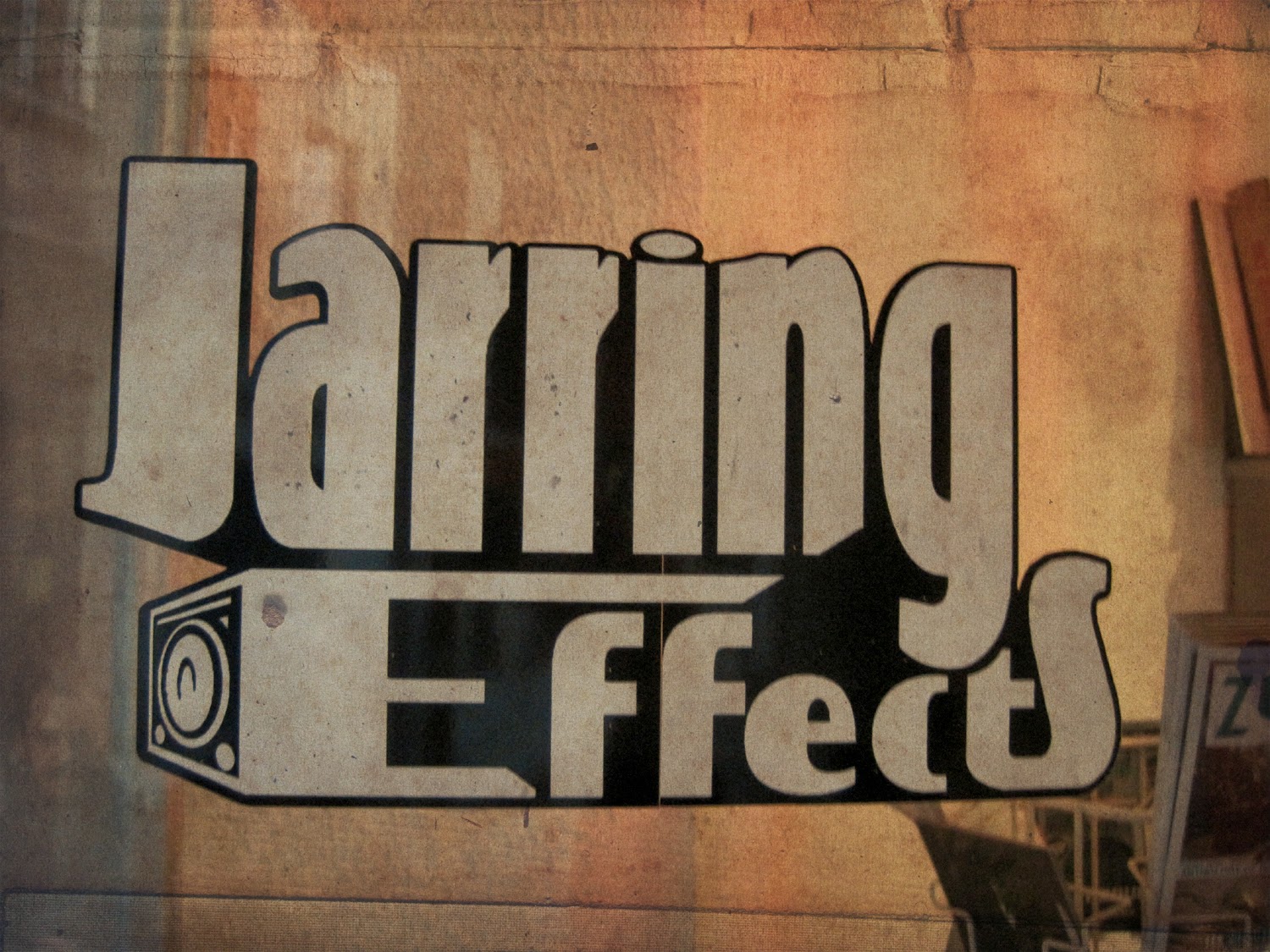 –
once back safe in le périscope we took the opportunity our securing our fill of the tasty food that was now waiting for us backstage and, with our bellies full and the guests having began to arrive, it was time to begin the show. in what was essentially a repeat performance of this night before, francis took to the stage first a set the scene with three of four of his masterful compositions before i stepped up to join him as we made our way through five or six titles together; and how it only became more and more apparent to the both of us how much we enjoyed and how well being onstage together was working out for us. two shows down and it already seemed like we had been working together since the very beginning; these strange intangible musical connexions.
–
isaac and pierre took to the stage soon after and absolutely destroyed their set. there may indeed have been more people in attendance the night before in paris, but how the sound in le périscope was absolutely crystal clear, and nice and loud; and how it was an absolute dream to get to hear every note, every line, every nuance of their set. truly spell-binding, and how exactly the same could be said of geste‘s subsequent performance. there is something deeply affecting about being able to hear songs in this context, in this undiluted and all-encompassing fashion; one of the many reasons why live music performance is still head and shoulders above any ‘second-hand’ experience by comparison. the strange magic of the arts indeed.
– 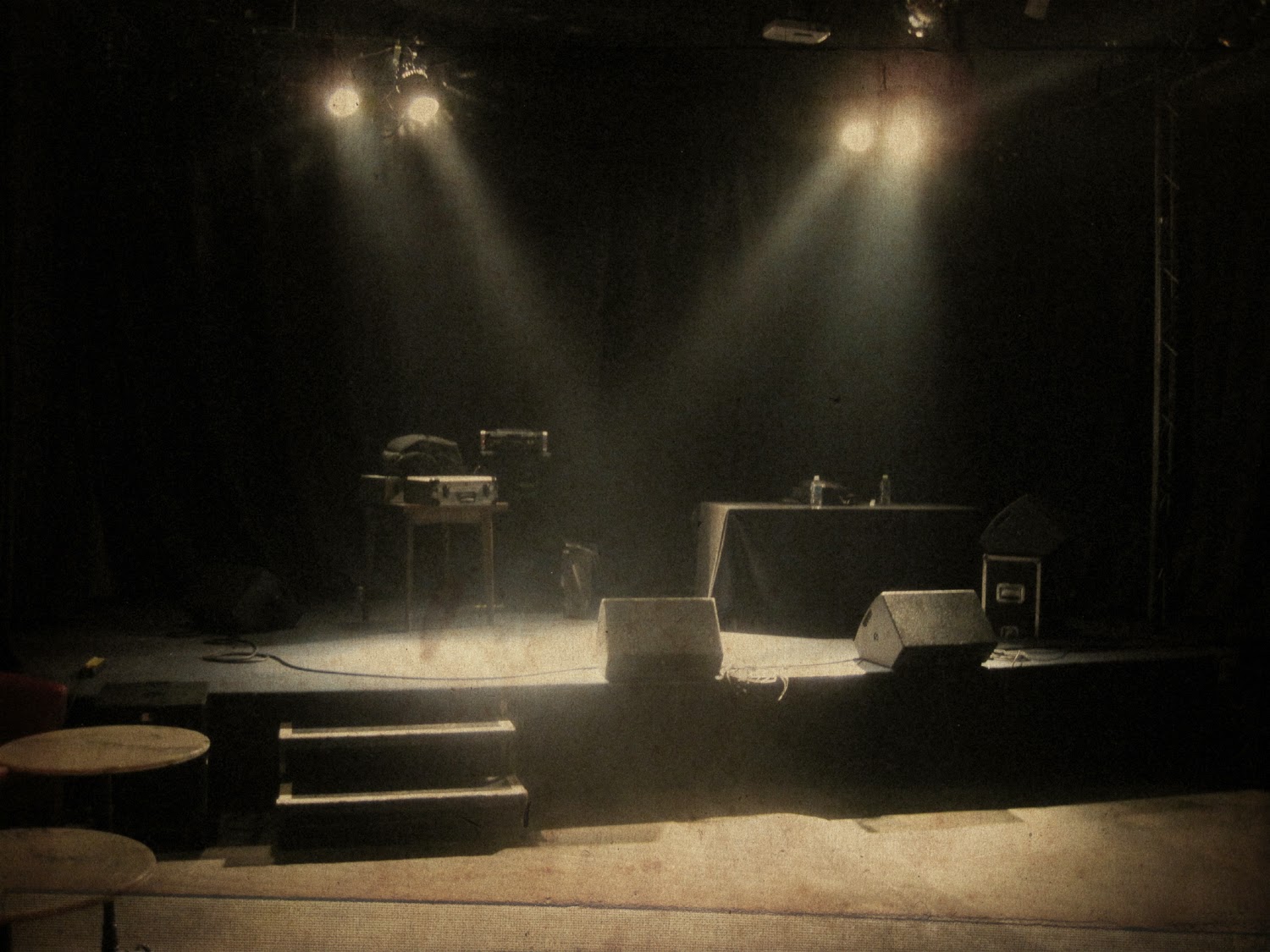 –
with the show over for the evening, the rest of the night was spent propping up the bar and getting the chance to talk with a host of wonderful souls who had made it down for the performance, many of whom i regrettably let the names of escape me, but how there is so much to be said for these magical moments when the opportunity presents itself to be able to commune with like-minded souls, to celebrate these songs and to simply share some moments together within this curious and magical life. the hour grew later and later and the drinks continued to flow, and how it were as if the spell would never end, but slowly farewells had to be in order and how weary eyes began to signal the slow paths back into the dreaming once again.
–
at some truly ungodly hour of the night we finally set about loading up the car, bidding fondest farewells to the dearest périscope and jarring effects families and making our way back to the girardeau residence, as per our sleeping arrangements for the evening. as matter-of-fact as it initially seemed, upon following miss sophie to the door of her building and indeed to the door of her family apartment, it quickly became apparent that our lodgings for the evening were far-beyond five star. words can scarcely do justice to how charming the apartment actually was, and how the interior decoration, curated by miss sophie herself, was truly impeccable. i remember that the only compliment i was able to muster in the moment was that it was fit enough for a band of buriers to shoot a music video there; no small feat indeed.
– 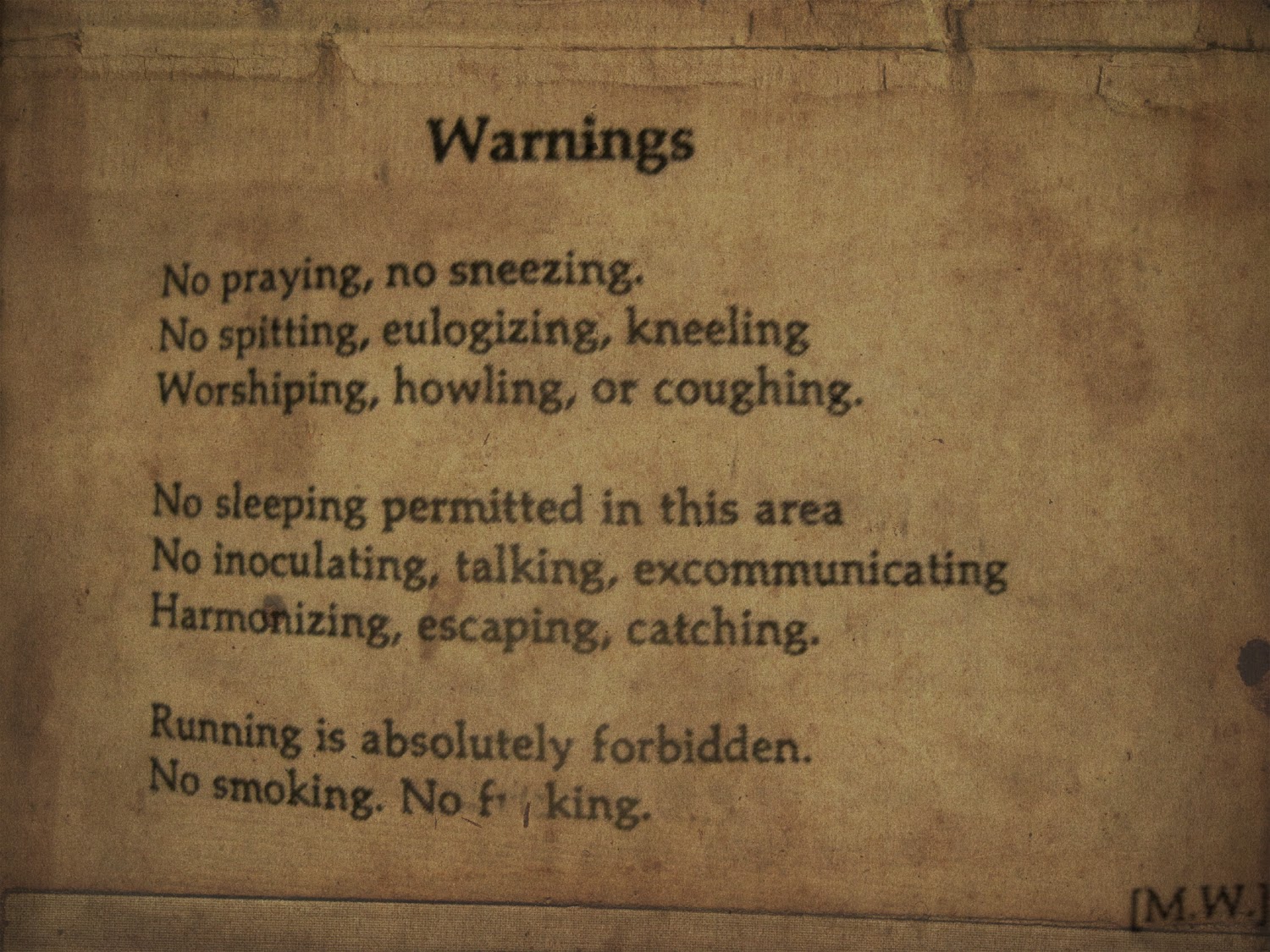 –
as per what were becoming usual operations, the kettle was quickly brewing and how there was a little time to relax after the chaos of the evening, to take tea and to reflect awhile on these past two days before we would reduce ourselves to but a few more hours sleep before the drive to strasbourg in the morning. slowly but surely we all gradually made our ways into the sleeping; desperately attempting to secure some kind of rest before the early morning light would beckon us up and back into the car once more. still, how perfectly-relaxed a group we were, and how soothing it was to be able to spend even this short while in such a magical safehouse; chances of a lifetime.
–
the morning arrived far earlier than any one of us would have desired, but we all took it in our stride, even dear miss sophie, who had no actual need to arise with the rest of us, other than her consistently kind and charming nature giving her cause to do so. soon tea and coffee’s were on the cards, the breakfast table was awash with tasty croissant and pain au chocolat treats and we were slowly able to gather ourselves back up to spill out onto the street. after what was becoming the usual morning game of tetris in packing the car, we took our individual turns to thank sophie for her kindness, hospitality and company, before we all piled back in to the vehicle, ready to begin the drive to strasbourg under the beautiful hot spring sunlight. weary travelers on a long road, filled with warmth and ready for the next steps of the adventures.
– 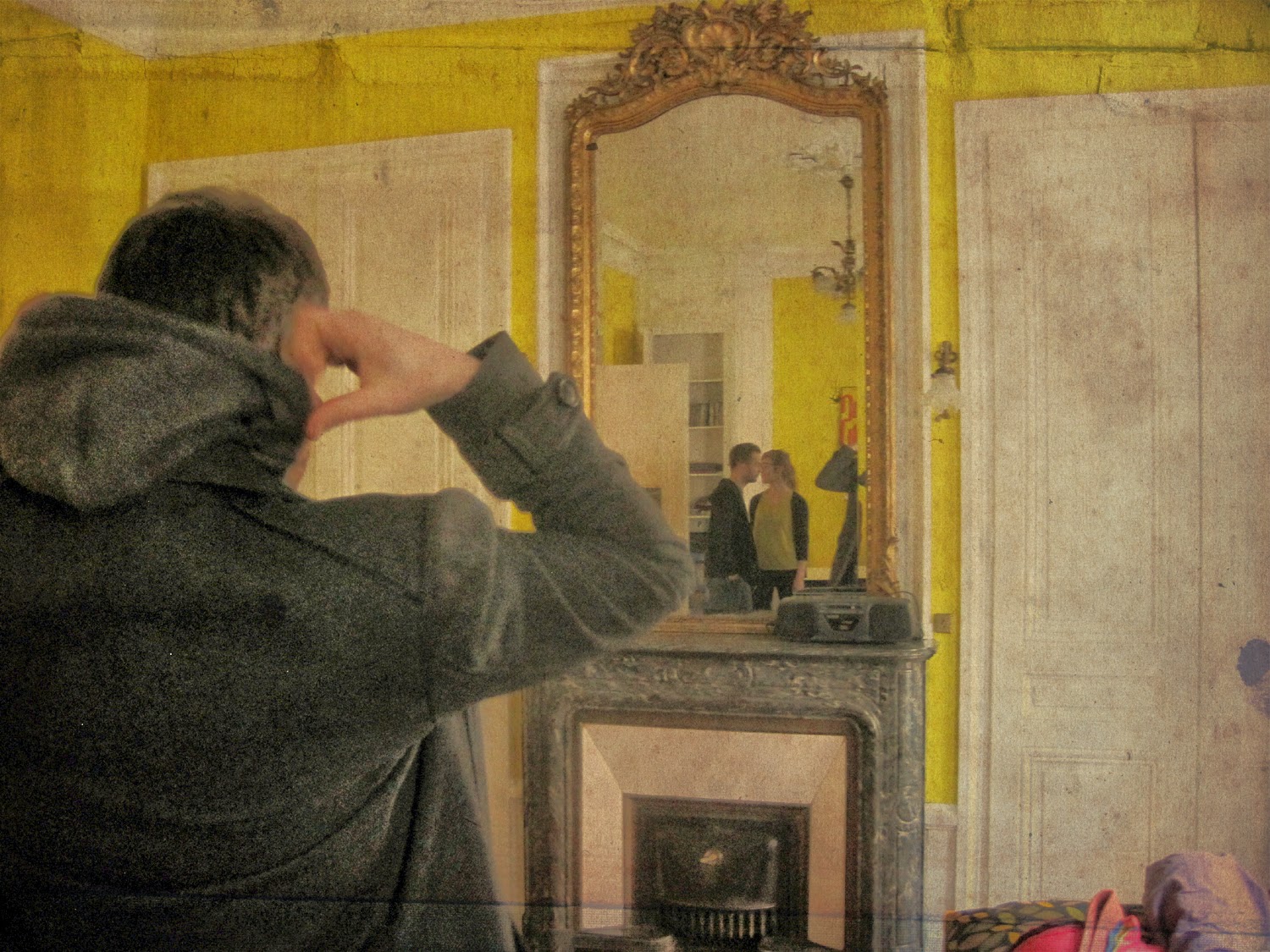 –
might i then take a moment to offer collective thanks on behalf of all our number to everyone involved and everyone who made it down to le périscope on this magical night. so many names, and so many of them having slipped away in the sleep-deprivation, but indeed lucas did wonders with our sound, mo and the jarring effects family were gentlemen and scholars indeed, captain alexandre who drove three hours and stayed in a hotel just to catch the show, this wonderful couple who sang along to every word of the ‘tap-water’ songs, the lovely miss sophie for her charming company and willingness to stay up far, far later than i can only imagine she would have desire this night. how we are filled with such gratitude and warmth for all your kindness, and how we can only dream of repeating the performance again before too many long moons pass.
–
next field report : strasbourg
–
6|6|7